The Genghis Khan Equestrian Statue, a part of the Genghis Khan Statue complex was erected in 2008 to commemorate Genghis Khan, the founder and first great khan of the Mongol Empire, which became the largest contiguous empire in the world’s history.

The statue is in 54 km-s from Ulaanbaatar where according to the legend, Genghis Khan found the whip. To find a whip was a very good sign for Mongolians, it is a good start of a great deal!

Symbolism is very important for Mongolian Art and sculpture and the architect who designed the statue is not an exception. Genghis Khan on horseback is symbolically pointed east towards his birthplace. It is really incredible that the statue is seen like rising in the distance from the grassy steppes.

If you walk to the head of the horse through its chest and neck, you will have a chance to view the panorama of surroundings. There are also museum related to the ancient archeological cultures in Mongolia, souvenir shops, restaurant, conference hall and tourist ger camp is right outside of the statue.

In 13th century complex, there are six different camps or tribes: relay-station camp, craftsmen camp, educational camp, herder’s camp, shaman’s camp, and king’s palace. Visiting all the camps, you will enjoy the real experience of the way of living of Mongolians in the 13th century. 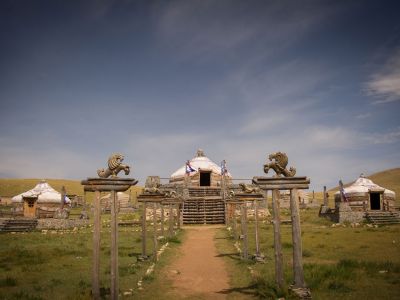 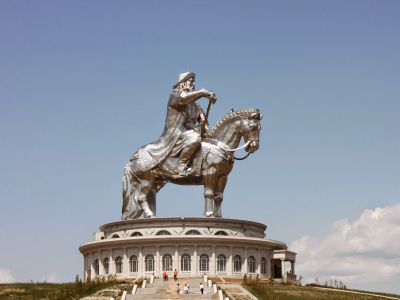