Gobi – is a vast region in Central Asia, the third largest hot desert in the world, characterized by desert and semi-desert landscapes. It covers the part of Southern Mongolia.

The area is 1.5 million square kilometers and for 65 million years of its existence, practically nothing has been changed here, still there are many species of flora and fauna surviving in the blistering heat of the Gobi desert: saxaul, wild onion, bindweed, saltwort and rare animals such as snow leopard, black – tailed gazelle, Gobi jerboa, Gobi bear etc.

In this underpopulated area, you will quietly pass a couple of hundred kilometers without meeting any people.  However, you will see two or three in numbers gers- a traditional dwelling for Mongolian nomads who move from one place to another at least three or four times a year seeking fertile pasture for their livestock, as if they suddenly come up.

The remains of prehistoric dinosaurs were found in the Gobi Desert in the early 20th century by American scientists who were looking for the evidence of the theory that Central Asia is the cradle of human civilization but instead discovered the extensive dinosaur fossilized deposits including bones, eggs, and their nests.

The Mongols divide Gobi Desert into 33 sectors, it means 33 small deserts inside one huge Gobi which differ in structure, species of flora and fauna: sandy part is only 3% of the entire desert, the rest of its expanses demonstrate unique landscapes of clay and stone, fascinating landscapes, where many animals and plants also inhabit. There are open, plain steppe with beautiful flowers, picturesque rocks, clay and stony grounds, vast depressions, rare oases, salt marshes and other landscapes. 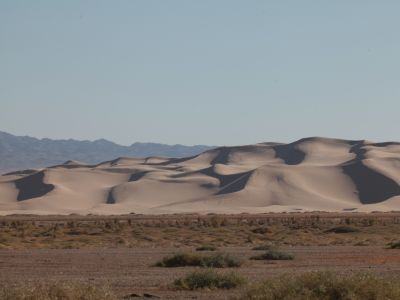