Kharakhorum was the capital city of the Mongol Empire between 1235 and 1260, palmy and mighty city of the 13th century. The ruins now lie in the north-western corner of Uvurkhangai province, in central Mongolia. Kharakhorum started as a nomadic camp, but after the defeat of the Jin Empire, Genghis' successor Ögedei Khan erected walls around the place and build a fixed palace. Then, under his successors’, Karakorum became a major site for world politics. Munkh Khan had the palace enlarged, and the great stupa temple completed. They had the Parisian goldsmith, Guillaume Bouchier design the Silver Tree of Karakorum for the city center.

Due to the different wars and conflicts between Mongol tribes and dynasties, the city was destructed and rebuilt several times and was consequently given up permanently in the 16th century leaving few ruins behind.

The oldest Buddhist Monastery complex of Erdene Zuu Monastery was built on the ruins of the Kharakhorum in the 16th century with 108 stupas. Various construction materials were taken from the ruin to build this monastery. The monastery was the first Buddhist center in Mongolia and housed over 1000 monks and held 62 temples at the peak. The temples contain a valuable collection of Buddhist sculptures, artwork and books.

In the 1930-s during the repression, most of the temples were destroyed and monks were killed. Now the monastery is being restored gradually. 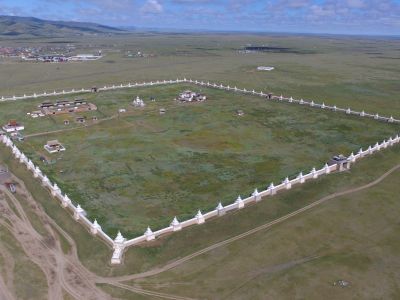